How to Play MXF files with VLC

Material eXchange Format ( MXF ) is a open-standard container or a wrapper format for digital audio and video media defined by a set of standards defined by the Society of Motion Picture and Television Engineers ( SMPTE ). There are many camcorders use MXF format, like Sony XDCAM series, Panasonic P2 series and canon XF series. Unfortunately MXF is not an easy format to handle both on Windows and Mac. In this article, we aim to offer you an easy way to help you play MXF with VLC media player freely.

The basic way to get MXF files played:

Find a media player that can support playing .mxf files as well as be compatible with the Mac or Windows OS.

VLC media player is the most successful free open source cross-platform multimedia player in Windows, Linux, Mac OS X and framework that plays most multimedia files as well as DVD, Audio CD, VCD, and various streaming protocols. Playing MXF files on VLC is by using the Mainconcept Reference codec, by installing this codec you can directly run your MXF files on the VLC media player.

While, there are still groups of people complain of the imported with low video quality or incapability of video playback. Here is an example:

“I can play the MXF files from my XF-100 in VLC, but the audio is choppy or non-existant...The video plays without a hitch. But no audio. Any fixes for this problem, or am I the only one? :)”

An quick workaround to get MXF files played:

Brorsoft MXF Converter, it’s a professional software helping you to transcode MXF files by Panasonic P2, Canon XF, Sony XDCAM series camcorders to any common video formats for Windows, like AVI, MKV, MP4, MPG, WMV… And it has preset the optimized settings for the different output format and players. Users can feel free to specify the target files. With it, you can fast convert MXF to AVI that can be easily played in VLC by downloading a codec like divX codec. If you are Mac users, please turn to the equivalent Mac version named Brorsoft MXF Converter for Mac to transcode .mxf files to VLC on Mac OS X (Mountain Lion included). Just download it and start the conversion following the tutorial below.

Download the MXF to AVI Converter for VLC Player:

This guide uses MXF Converter Windows (Windows 8/10 included) version screenshots. The way to change mxf for VLC on Mac is almost the same. Just make sure you get the right version according to your computer operating system.

Step 1: Install and launch this best MXF to AVI Converter; click the Add button to import the MXF files to the converter.

Step 2: Click Format bar to choose output format and you can choose MP4, AVI, MKV or other common formats. Here we choose “HD Video -> AVI HD Video (*.avi)” as example, which is supported by nearly all player and portable devices. 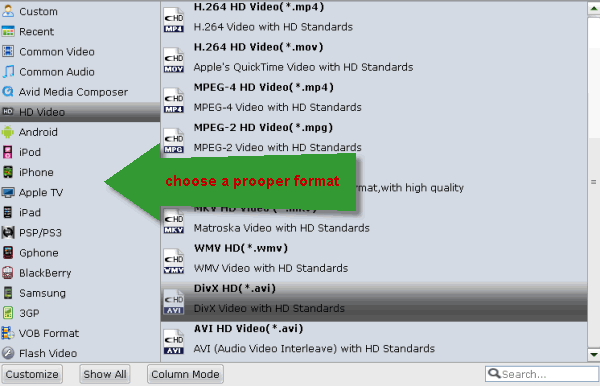 Step 3: You can adjust the parameters by clicking "settings" button, choose the resolution, bitrate, frame rate as you want.