Although, Adobe claimed that the Premiere Pro CS5 and above version offers full native support for the high-definition video format AVCHD, when ingest the AVCHD footages to Premiere Pro for editing, some problems still appear, taking so long time while importing or even refused to be imported as the below users encountered.

I have problem with my Sony Nex-VG10 camera. When if film, my camera is getting AVCHD videos. But when I use the Adobe Premiere Pro CS5.5 to edit the AVCHD, the program refused the file. What I should do with this problem.

I have couple hours of AVCHD documentary style wedding footage shot with a Canon HFS100 camera, I am attempting to edit the footage natively in Premiere Pro CS5 in a multicam setup but playback is too choppy and previews take a long time to render. That said, can I convert the MTS's into a common format that premiere can handle better and preferably loss-less?

The reason of this problem lies on the huge file size of AVCHD format. Moreover, AVCHD is not the most compatible format for the Premiere Pro. There is no doubt that it will take more time on rendering while importing AVCHD files in the Premiere Pro. Well, if you wanna edit AVCHD in Adobe Premiere in an easier and quicker way, you'd better transcode the AVCHD .mts/.m2ts to Adobe Premiere Pro friendly formats (e.g. MPEG-2) in advance.

The following tutorial will guide you through how to convert AVCHD footage to Premiere compatible format using Brorsoft MTS/M2TS Converter. It's free, clean and safe to install and use. The equivalent Mac version is MTS/M2TS Converter for Mac, which can encode AVCHD to Premiere Pro on Mac (Lion and Mountain Lion included). Just make sure you get the right version according to your computer operating system. 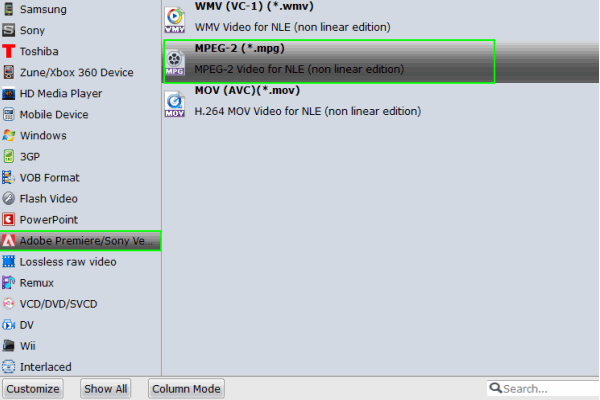 Step 3: Adjust the video and audio parameters, including the Bitrate of Video&Audio, Video Size, Sample Rate, Frame Rate, Audio Channels, etc., by clicking the Settings button on the main interface for getting the best quality.

Tips
a. For editing MPEG-2 in Adobe Premiere, the best Frame Rate is 30fps, so we recommend you set 1920*1080 as video size and 30fps or 29.97fps as Frame Rate on the Profile Settings.
b. If you want to get the MTS files converted with 5.1 channels, please change the video codec from mp2 to ac3 and then you can get the 5.1 channels, since the mp2 codec can not support 5.1 channels.

After the process completes, click "Open" button to find the generated videos, and then you can transfer the recordings to Adobe Premiere easily and quickly. In this way, you can edit your AVCHD .mts/m2ts files in Adobe Premiere Pro smoothly.

Additonal Tips:
If you want the converted file to be smaller and keep the original 50p/60p frame rate for importing and editing in Adobe Premiere or storing in your PC, the WMV format will be the suitable choice for you. PS: It is not 100% guarantee that the output 50p/60p WMV file can be imported and edited well in Adobe Premiere.