What If You Can't Stream/Play MKV from NAS

As we know, being a NAS, it wouldn't matter what files or file formats you are putting on it. It's just files on a disk for the NAS to organize and store. But the point here is, when we get some MKV to NAS, sometimes we can't get the MKV files playback from NAS like on media player, smart TV, let's look at some issues:

Have the similar trouble? Don't worry. This article aims to give you an easy way to fix the issue. Since MKV is not an ideal format for streaming via NAS, and few media server and media player can do a particularly good job on HD MKVs, a quick workaround is to convert MKV to a more compatible format like MP4, AVI before transferring to NAS.

In this case, Brorsoft Video Converter comes out for you. It is capable of converting MKV to MP4, AVI, MOV for NAS streaming with no quality loss. And what we've tested out is that MP4 would be one best target format for it is fully compatible with nearly all media server and media devices including iPad, iPhone, PS3, Apple TV, etc. Far more than a video conversion program, it provides some simple video editing functions, letting you touch up and personalize your video instantly to get the part and effect you want. If you are running on Mac OS X, turn to Video Converter for Mac. Download it now and let's start the conversion.

How to convert MKV for NAS streaming easily

Step 1. Install and launch NAS Video Converter. Add the MKV videos which you want to convert by directly dragging them to the main window of this program. Another way to import files can be done with clicking the Add button. It supports batch conversion.

Step 2. Click Format bar and choose your desired format. To put MKV on NAS for easier streaming, we recommend MP4 as the output format. And click Settings bar, you can adjust the level of compression to suit the quality you want. 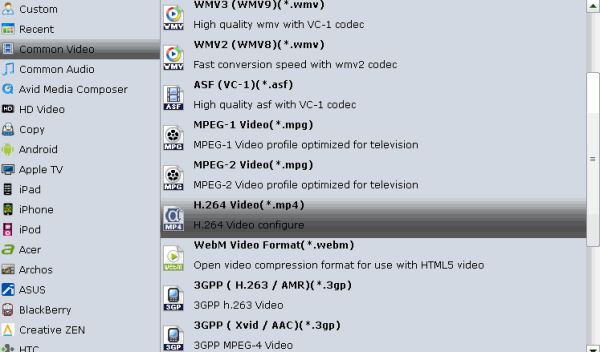 After the conversion, click Open button to find the output .MP4 video. Then it would be easy for you to share it off the NAS effortlessly. Make sure the wireless network connection is accessible among the NAS and PS3, HD TV or other media players.